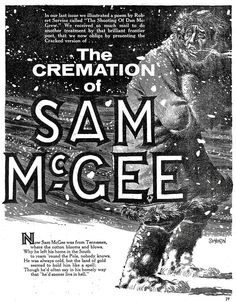 The Northern Lights have seen queer sights
But the queerest they ever did see
Was that night on the marge of Lake Lebarge
When I cremated Sam McGee
Robert W. Service, The Cremation of Sam Magee

It is enough to give cremations a bad name, especially after an industry publication saysin bold letters that: “Cremation is the New Tradition” suggesting a tradition can be created as quickly as, say instant oatmeal. The new tradition, however, had a bad spring. In March it was reported that a Bronx funeral home inadvertently cremated the wrong corpse and in April a suit was filed against a mortuary in Rochester that cremated someone who had left specific instructions that following his death he did not want to be cremated. Those kinds of mistakes could of course, happen to anyone and should not put the practice in bad odor. Nonetheless, it is unfortunate when that kind of mistake happens, since depending on the nature of the mistake, it can be hard to correct. The Rochester suit is an example of that. Once cremation of the wrong person has taken place, there is nothing the funeral home can do to correct the error. The Bronx case was different.

In the Bronx case the family had an elaborate open casket service at a church in Harlem in which the wrong person had been placed in the casket attired in the decedent’s clothes and jewelry by the funeral home employees. Although some who viewed the decedent before the service were surprised by her appearance, they attributed that to the fact she had had a serious illness and lots of medical treatments that had altered her appearance. (A small child immediately said the person he was viewing was not his grandmother but his observation was ignored.) It was only after the wrong corpse had been cremated that the error was discovered. Since the wrong corpse had been on display, as it were, over 100 people were attending a service at which the corpse of honor was not in attendance. That was the bad news. The good news was that although the wrong corpse had been cremated, it was possible to cremate the proper corpse after the error had been discovered. The director of the funeral home, who is presumably expert in these matters, was shown a photograph of the two women involved and said: “Looks like the same woman to me.” He went on to say to the reporter that: “We’re known for our care, compassion, professionalism, the quality of our work.”