Dissolving the dead A radical alternative to burial and cremation 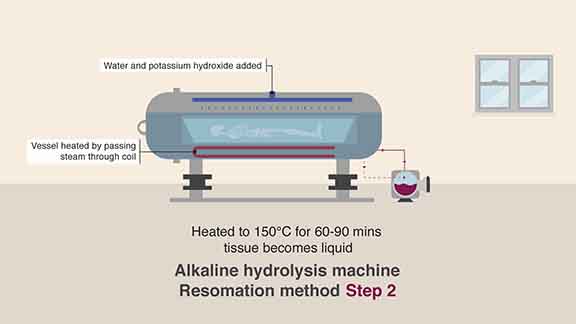 For decades, most people arranging a funeral have faced a simple choice – burial or cremation?

But in parts of the US and Canada a third option is now available – dissolving bodies in an alkaline solution.
It will arrive in the UK soon.

Its technical name is alkaline hydrolysis, but it is being marketed as “green cremation”.

When we are buried, we ask our planet for resources a final time – wood for a coffin, cotton for the lining, stone for a monument.

In the US, graves are usually either lined with concrete or the coffin is placed in a metal or concrete vault which will not decompose.

But cremation has an environmental cost too. To burn a single body, a cremator machine generates enough heat to warm a home in winter for a week, even in freezing Minnesota.

Bradshaw’s are one of just 14 funeral homes in the world to offer this “green” option. Alkaline hydrolysis is said to be much more environmentally friendly than conventional cremation.

They offer both services at the same price and say the new kind of cremation has proved an unexpected hit.

Of their customers who choose not to be buried – about half of the total – 80% opt for alkaline hydrolysis.

But environmental benefits may not be the only factors influencing their decision.

In choosing green cremation Judi Olmsted was mindful of Bob’s lifelong love of water and she perceived, in the water-based method, an echo of childhood baptism, which she found touching.

Robert’s memorial is held on the outskirts of St Paul, Minnesota, in St Andrew’s, the light-filled Lutheran church the couple attended for years.

The urn containing his powdered bones sits on a table next to flowers, photos and a wooden duck.

The service opens with Amazing Grace and closes with How Great Thou Art.

Afterwards, I ask one of Bradshaw’s funeral directors, Anne Christ, what reasons other people give for choosing alkaline hydrolysis.

“There are some folks that we deal with that are very scientifically-minded and of course, interested in that environmental piece,” she says.

“But really it’s more about their emotions at that point. I would say most of the people make that decision on a gut feeling about water being gentle.”

Is dissolving a body in chemicals really gentler than burning it?

Do people think about what goes on in alkaline hydrolysis?

“There’s a certain amount they don’t want to know,” she chuckles.